Most Australians’ first experience of study takes place in schools, since participation in primary and secondary education is mandatory. As of 2011, 64.1% of Australians had tertiary qualifications either from university or from vocational education and training (VET) institutions, with that percentage being on a fairly steady upward trend over the preceding ten years and higher education (HE) slightly outpacing VET in terms of growth, as shown in Fig. 1. 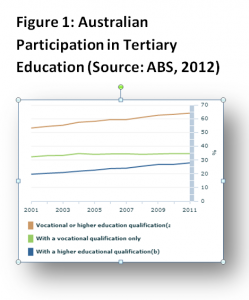 Globally, according to Ericson and Vonk (2012), only around 7% of people globally obtain a college degree. When I was at university some sixteen years ago I was told that figure was less than 1%, so no doubt things are improving. But that still means that nine out of every ten people in the world are missing out. Access to a tertiary education, much less a quality one, is still available only to a small proportion of us. So, if we are part of that small minority of the world’s citizens, why should we choose to take the opportunity given to us and participate in higher education?

Why do we need to study?

Do Australians focus on a career and then require study as a means of entry to that career? As some evidence would suggest, not necessarily. A study by Mahoney and Whitlaw (2002) found that of the 1996 cohort of Australian students enrolling in a hospitality course at an Australian university, the majority (53%) had a general goal of studying at university and a significant portion (37%) made a decision upon enrolling the course that they would pursue a career in hospitality. However, only 10% had made a decision to embark on a career in hospitality prior to enrolment. Admittedly this was some time ago, but their findings are supported by more recent anecdotal evidence such as the continued popularity of generalist degrees and the rise of Moocs, which provide no qualification but allow for learning opportunities. Not all that many people know what they want to do in their lives and those who think they do are often disappointed. It is estimated that the average Generation Y will change jobs ten times during their lifetime (Irvine, 2012). It is almost universally accepted that most of us will at some stage work in fields that have only tenuous links to our initial qualification after leaving high school and in many cases we undertake a course and never work in a related field. 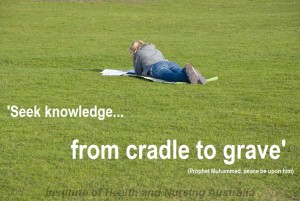 At a more general level, however, there is a clear statistical correlation between higher levels of education and improved employment outcomes. The University of Adelaide (2013) cites graduate destination survey data to argue that employability, income, career satisfaction and probability of finding full time work.

Looking ahead, there is increasing evidence that the rise of automation will virtually eliminate low to medium skilled work. According to Stewart (2015) 47% of employees in the USA and 35% of those in the UK are at risk of being replaced by automation technologies in the next 20 years. Treanor (2016) cites high skill levels and adaptability as two characteristics that are likely to differentiate those who gain from the automation trend from those who lose. If your work is repetitive and requires little thinking, it is conceivable that it could be automated very soon, but work that has academic elements is likely to be kept in human hands for a lot longer.

So studying at a more advanced level has the potential to future proof your career. With adaptability being favored, tight links between study or training and specific vocational outcomes may in effect prove disadvantageous in some areas, though there may well be an exception for relatively short vocationally oriented courses that can be renewed or updated relatively regularly to address the rise and fall of specific skillset requirements, like first aid and CPR training, or courses that prepare students for roles that are all about human interaction and caring, like courses in early childhood education, carer roles or even very complex care roles such as nursing.

A final point is that education has an important role in democracy. Whether they are rich or poor, educated citizens are better able to participate in public debate and contribute to democracy than those who have studied less. For the sake of democracy it is therefore essential that shifts to automation do not create a two teared system, where former low skilled workers lack both the ability to gain employment and the ability to participate in democracy and a ruled over by an educated elite. There have been efforts to increase access to education in Australia, such as

What stops people from studying?

Well, that will be the topic for another post in the not too distant future, but if you have any ideas, why not post them in the comments?